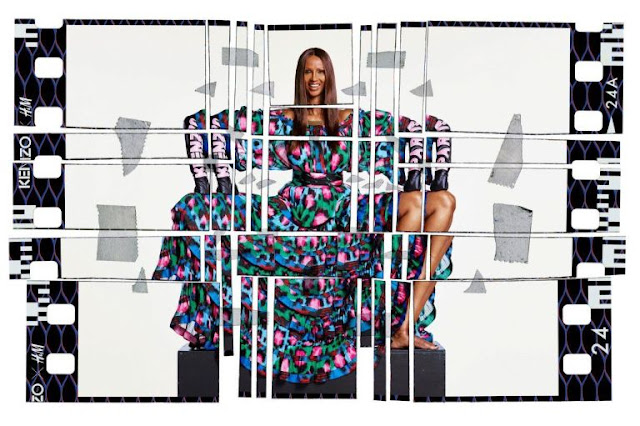 Photo: Elle
Were you standing in line to get the last H&M collaboration of Balmain? If you were, then you know it was sold out in less than sixty seconds and if you tried to order online you know that in less time the site eventually crashed.
H&M has been collaborating with high fashion designers for years now including Balmain, Karl Lagerfeld and Alexander Wang, to name a few. Well your in for a treat as H&M has been talking since March about the new collaboration with Kenzo, Kenzo X H&M, which has now announced they will launch the colorful line on November 3!
Designers Carol Lim and Humberto Leon are super excited for the pieces that will be for sale. Since Friday, everyone has been talking about it, especially Fashionista, who released pictures of some of the pieces and their prices. Other sites like People Style released photos of the brightly colored garments and abstract backgrounds in the Kenzo X H&M Campaign.

Photo: Fashionista
Prices of the collection are steep, similar to the Balmain Launch, ranging between $24.99 for beanies and $549 for a multi patterned, layered dress. The collection are includes outerwear like puffer jackets and accessories such as sunglasses and flipflops. There are also tote bags that run between $129 and $249, these are said to look more like shopping bags than handbags.
The 80′s inspired collection is full of bright and fun colors, animals prints and geometric patterns that are tied together with traditional Japanese silhouettes. It’s a fun and fashionable line that is also very structured and meaningful. Celebrities such as Iman, Chance the Rapper ad Rosario Dawson can be seen in the campaign photos that were first released on Instagram. The collection offers over 110 pieces which is more than the Balmain Collection so I wonder if they are producing more pieces of if it will sell out just as fast. I guess we will find out on November 3 when the collection is launched.
Get ready to get your Kenzo X H&M pieces, I know I am dying to have that pink, zebra hat with the tied up bow on top and a pair of green and black boots! What pieces excite you in this collection? Comment below on what pieces you like the best and what pieces you get when the collection launches.