Tiddlytubbies: 90s Kids Were NOT Ready

The internet is freaking out about the Tiddlytubbies. Haven't heard of them yet? Well, Tiddlytubbies are the children of the hit 90s show, Teletubbies. Did your mouth just drop? Confused? Feeling old? Yes, I, too, had all these thoughts and emotions happening at once! Well watch this video of the Tiddlytubbies song and feel really old.
I grew up watching the Teletubbies and my brothers and sisters pretended to be them. I was Po, Corey was Tinky Winky, Zachary was Laa-Laa and our step-brother, Michael, was Dipsy. Sorry, Tiff, you weren't born yet. We loved this show among Arthur, Barney and every other PBS show when you didn't have cable. But there was always a joke that Tinky Winky was gay, La-La was a moron and I am pretty sure they were all guys. So why is the internet freaking out about them having kids? 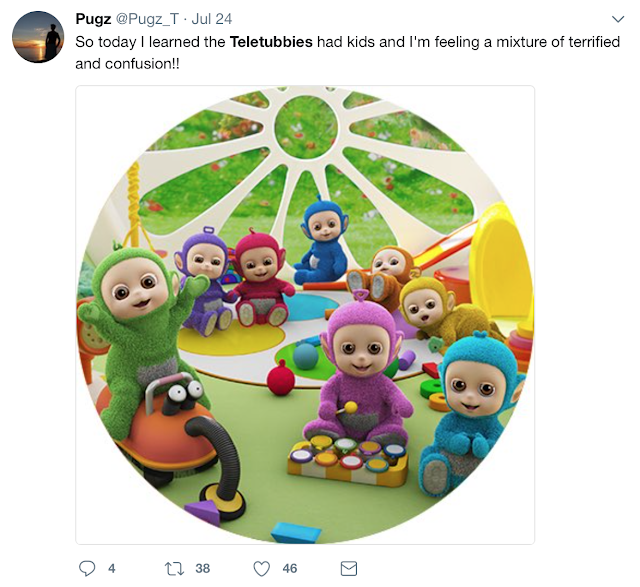 As if the Teletubbies weren't creepy enough they decided to reproduce. The Tiddlytubbies are named Ping (pink), Umby Pumby (yellow), Daa-Daa (green), Baa (dark blue), Mi-Mi (light blue), RuRu (orange), Nin (purple), Duggle Dee (red). But whom belongs to whom and weren't the Teletubbies all guys, if so, Did they adopt? Where are their wives? I am as confused as the rest of the internet. But wait, I have also seen that the Tiddlytubbies are related to the Teletubbies but they are not actually their kids? What is happening? So I did some digging for you, there is not much out there yet but this is what I have found.
Okay, so for starters the Tiddlytubbies were actually introduced on The Teletubbies Nick Jr. series in 2015. Only recently did the internet, myself included, start freaking out when we finally realized what the hell was happening. Because of the high demand for these, actually adorable, creatures, they have decided to bring out toys this month of all the Tiddlytubbies. There are 8 total Tiddlytubbies and the first episode of their appearance was on Season 1, Episode 1: Babies where Po is seen playing with the babies. It is not known who created these little guys out of the four OGs, but we do know that they are at least related and have to take care of them and teach them, as all species do.

Do I think my childhood memories are ruined? No. I think now I will have to explain to my own children these creepy little, confusing, alien looking creatures but its fine, I lived through it. I just need Nick Jr. to explain to a little more. We all know how babies are made, but in Tele World I need to know by WHOM they were made, please.